Is market neutrality really that important?

When I started trading futures a few years ago, I was obsessed with the idea of market neutrality. I was primarily trying to put together a portfolio that was as market neutral as possible. In practice, I faced the fact that complete market neutrality is, in principle, impossible to achieve due to the nature of non-stationarity in the market. I complained about this to my brilliant friend. He replied to me, “Why on earth do we need market neutrality when our only goal is to make money?”. After thinking about his words, I quickly began to understand what the point of the portfolio really is and what I should be doing. I was able to solve the task simply by combining the least correlated instruments with the maximum unit of return and forgetting about the beautiful abstraction of complete market neutrality. From that moment on, I’ve been on a roll.

The statement for several years, by the way, is here.

Below I will explain how the simplest model works. This model solves the problem of deep and long drawdowns in the securities market, and does so with almost no loss of profitability.

The Miracle Of Lowest Correlations

Here we have the S&P500. The yield chart includes reinvested dividends: 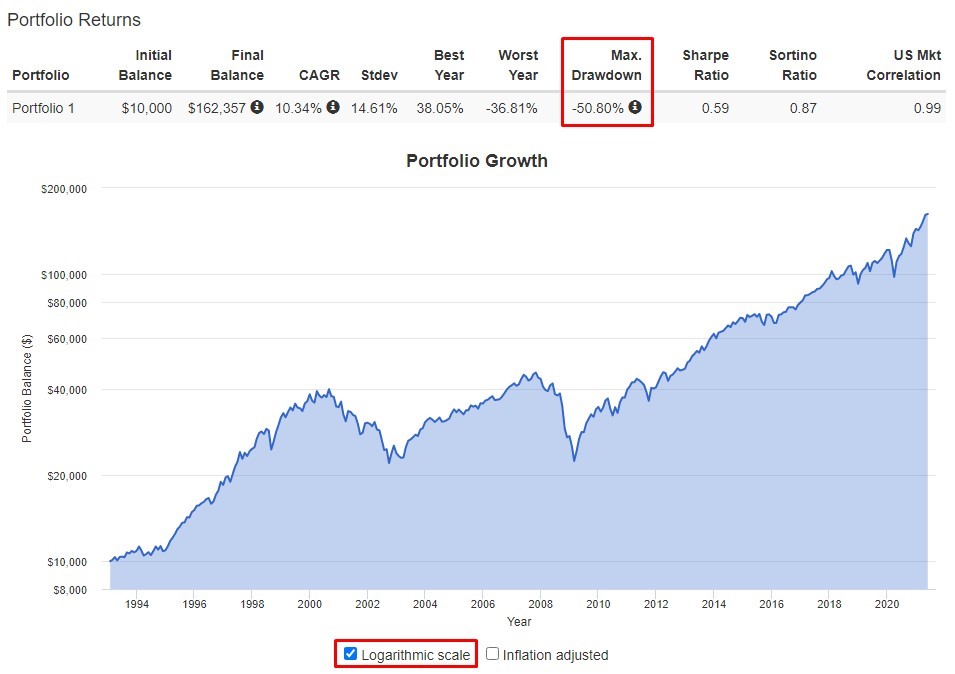 In general, everything is ok with this, but the depth of drawdowns (> 50%) and their duration (4.5 years) are upsetting. We use a logarithmic scale here because it’s convenient to look at the shape of the chart on a single scale, excluding the exponential acceleration of the chart because of the compound interest over a large number of years.

Now let’s look at the US government bond yield chart. There are smaller drawdowns, their time period is shorter (3 years), but the profit is also smaller: 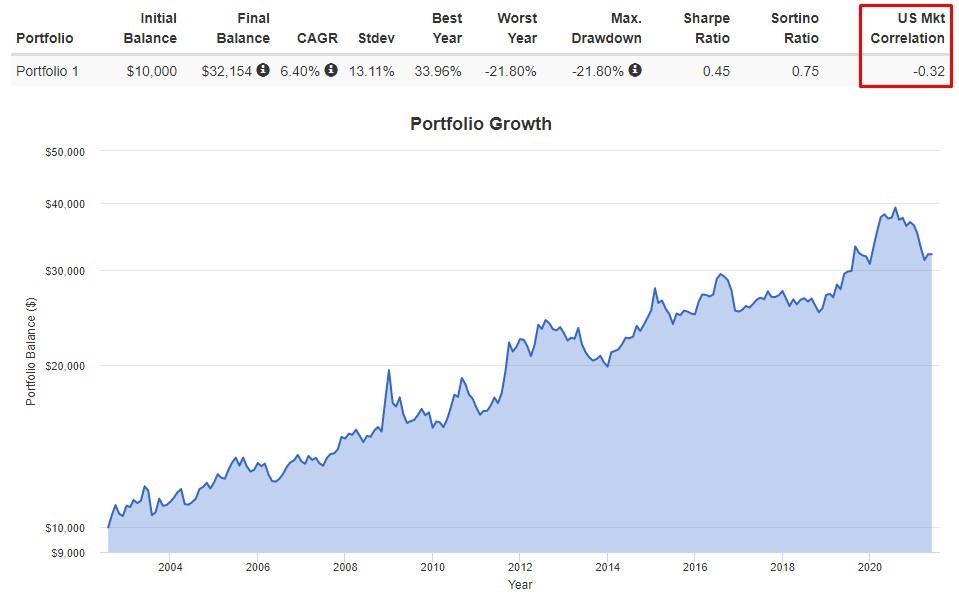 But there’s one very important point. Look at the correlation to the market, and then look at the combined chart: 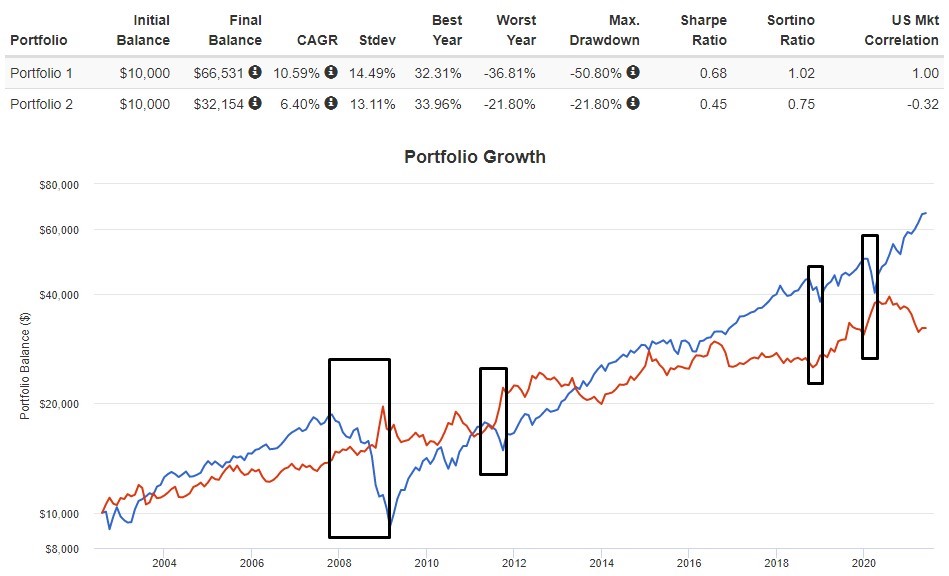 We can observe that when the market falls (blue line), treasuries rebound (red line). It’s another story why this happens. Let’s not talk about that right now. But if we combine 2 impulsively different correlations, we get this: 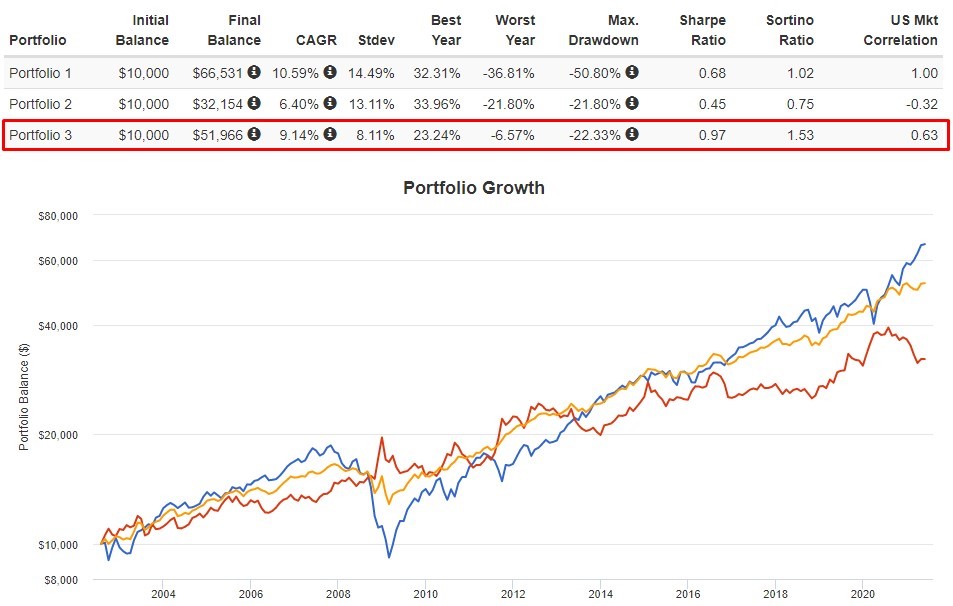 Not bad! We now have a reduction in drawdown of more than 2 times compared to SPY, and the return has only decreased by 1/10, and the time spent in drawdown has become 1.5 times less. This is essentially the “grail” or, as I like to call it, “the miracle of lowest correlations”, in its very rough execution: combining uncorrelated curves to reduce risk while adding up their returns.

But let’s not talk about profitability in layman’s terms. Let’s look at proper risk/return ratios. In my work, I use two coefficients: Sharpe and Calmar. Sharpe is the annual return minus the Federal Reserve Rate divided by the annual standard deviation. In other words, by what return we fluctuate up and down on average. In practice, I simply divide the annual return by the standard deviation and don’t take into account the rate because it’s only critical if the instruments are denominated in different currencies but we have everything in USD. I call this ratio “eSharpe” (easy Sharpe). Calmar is the same thing, only the annual return is divided by the maximum historical drawdown. The first measures risk/reward “on average”, and the second gives us the understanding of risk/reward in the context of the toughest situation there has been.

Now we need to collect more of these uncorrelated or at least slightly correlated returns. I’m not going to bother you with huge arrays of backtests and with analyzing their correlation moments. I’m just going to give you what I already have. Defensive sectors work best. Staples (XLP), Utilities (XLU), Healthcare (XLV). Let’s look at the chart below: 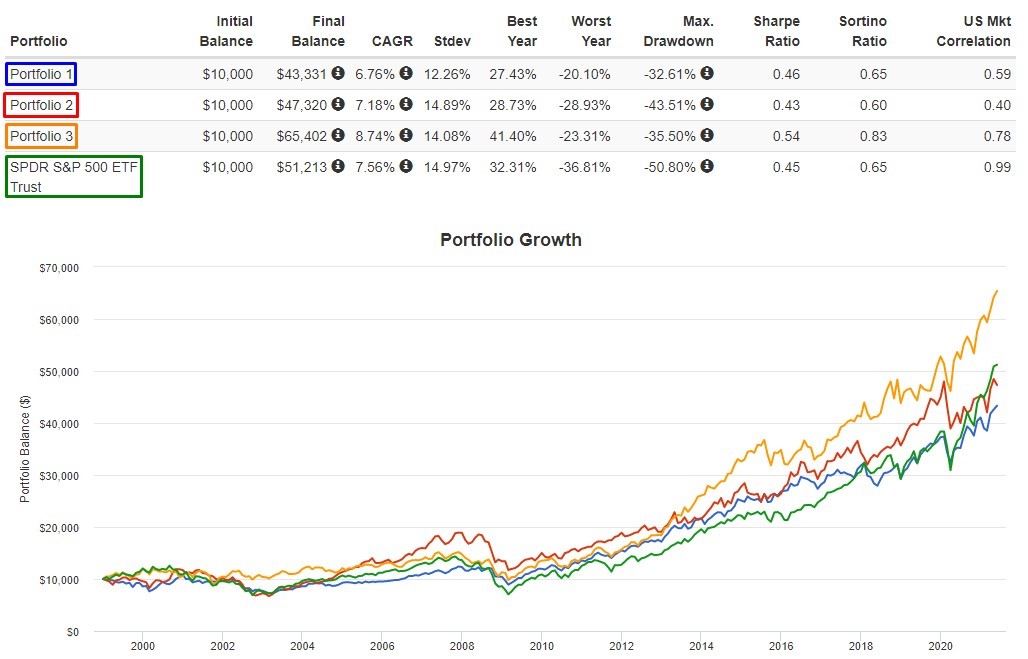 Why exactly are we using these sectors? The cash flow of these sectors is only weakly dependent on the current market situation. Because Staples are all the things people buy in supermarkets: soft drinks, chewing gum, sneakers, and everything like that, including the supermarket chains themselves. People almost do not save on any of that in a crisis. XLU is the basic infrastructure without which humanity cannot physically live: water, gas, electricity, etc. XLV is healthcare, which has a constant flow of customers because people are always getting sick. But in developed countries we have a rapidly aging but at the same time rapidly growing richer population. As a result, it is against the backdrop of such global fundamentals that we see this performance of the sector.

Now we do an extremely complex action – we bring these soft correlations to the market together into one portfolio, one third of each instrument. And lo and behold: 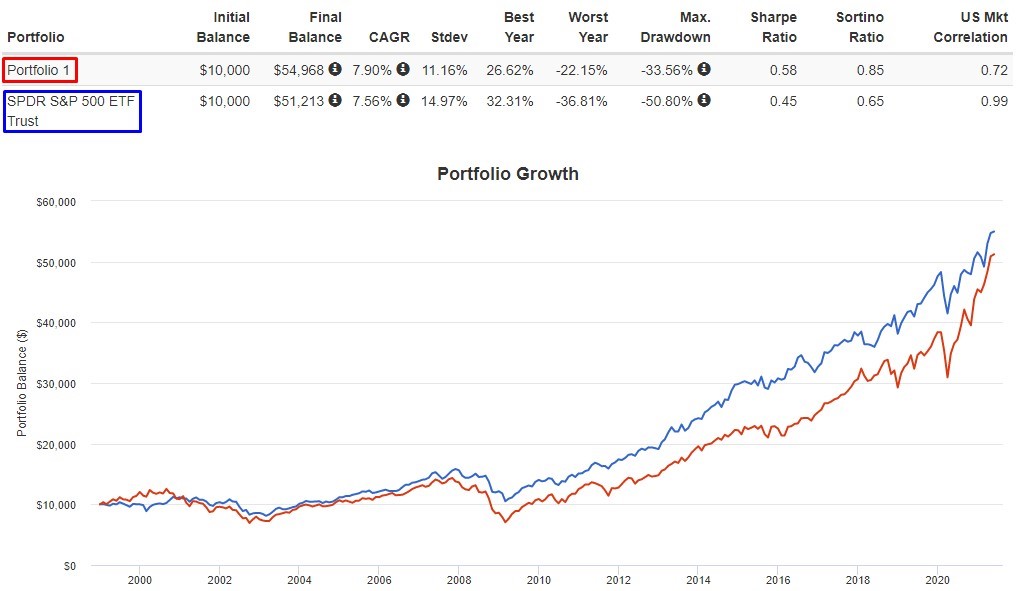 So what do we do next? Of course, to this mass of positive market correlations, we add a negative market correlation from treasuries, which we analyzed at the very beginning. Let’s take the 60/40 ratio, not 50/50, because XLP-XLU-XLV are less volatile than SPY. Basically, we should include less high volatility instruments and more low volatility instruments in our portfolio so that the impact of each instrument in the overall portfolio would not be excessive. Bam: 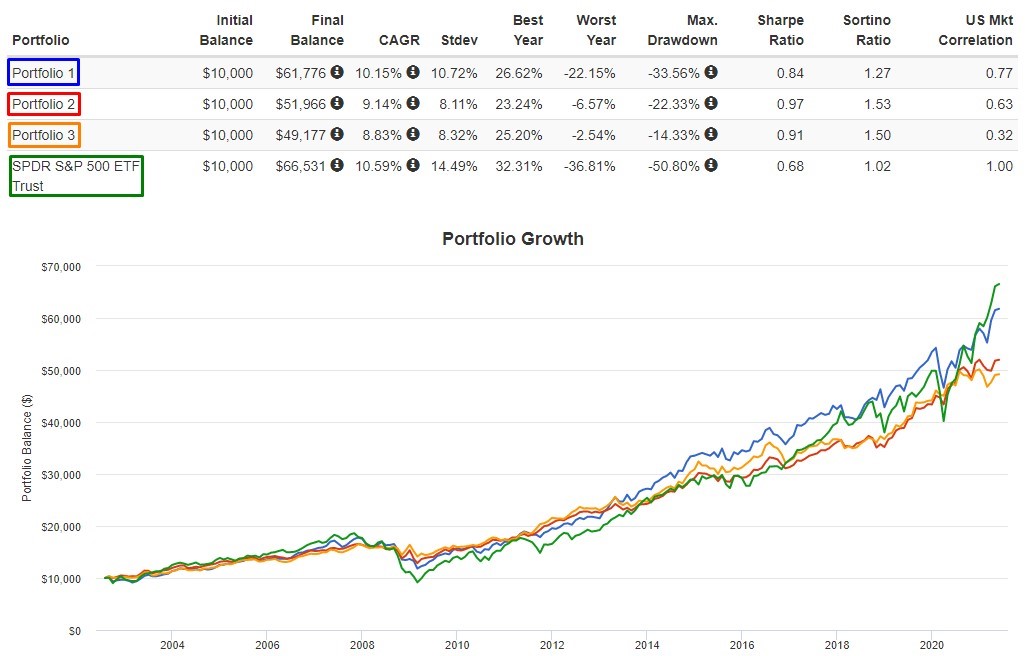 Well, now we have the return of SPY-TLT, only with a drawdown of 1.5 times less and 3 times less than in the S&P500 initially.

Please note that the Calmar ratio beats the usual SPY in terms of risk/return by 3 times!

Well, that’s it : ) We’ve created a portfolio that will perform better than what 99% of securities analysts will advise you, almost all of whom have never backtested the ideas they offer to trade.

In the following articles we’ll analyze the added benefits of defensive sectors, we’ll understand why we should use government bonds and not corporate bonds, and we’ll increase the profitability of this portfolio by several percent without using any margin, and we’ll beat the S&P500 not only in relative terms but also in absolute terms.

If you have any remarks or questions, leave a comment below this article or contact me here. I’m eager to answer all your questions.

Good system trading to you all and see you soon!