Few people know it, but there’s a very simple way to beat the profitability of the main American index, the S&P500. 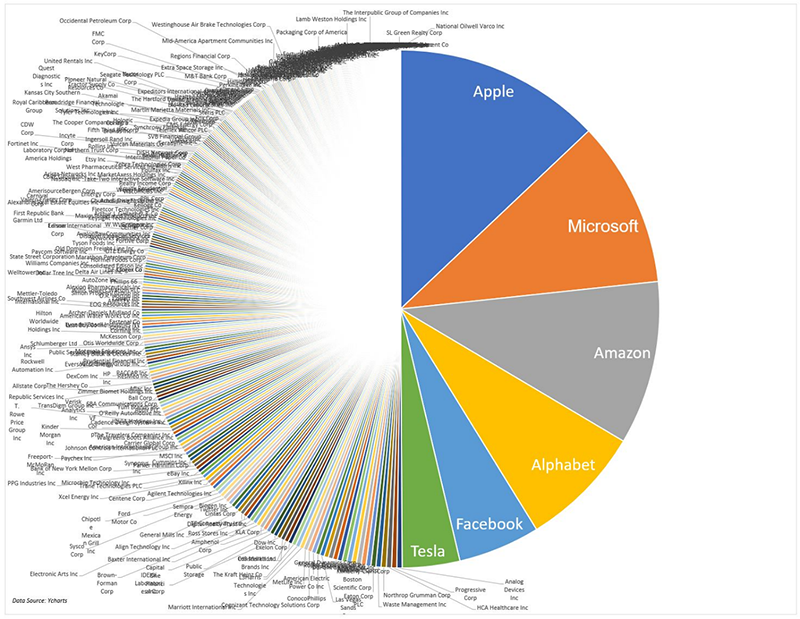 Half of the capitalization of the S&P500 is accounted for by just 6 of 505 tickers.

And the main property of large and mega capitalizations is that it’s extremely difficult for them to grow ahead of the average market dynamics, due to the high base effect and the real world’s inability to endlessly consume an increasing number of goods and services produced by those companies. The main rule is that the smaller the company, the easier it is to scale with a high-quality business model because there’s still a lot of potentially unoccupied market space. In other words, smaller companies have a legal cheat code over large companies called the “low base effect”.

And then the question immediately arises: can we increase the profitability of our investments without buying large and mega companies that have a hard time growing because they actively resist the physical limits of the space around them? The answer is obvious: Yes, we can. The easiest way to verify this is to look at the equally weighted S&P500 index, where companies are not weighted in proportion to their capitalization, but simply by their share. In such an index, there won’t be a gigantic predominance of large capitalizations over smaller ones. Portfoliovisualizer.com will help us backtest this idea. 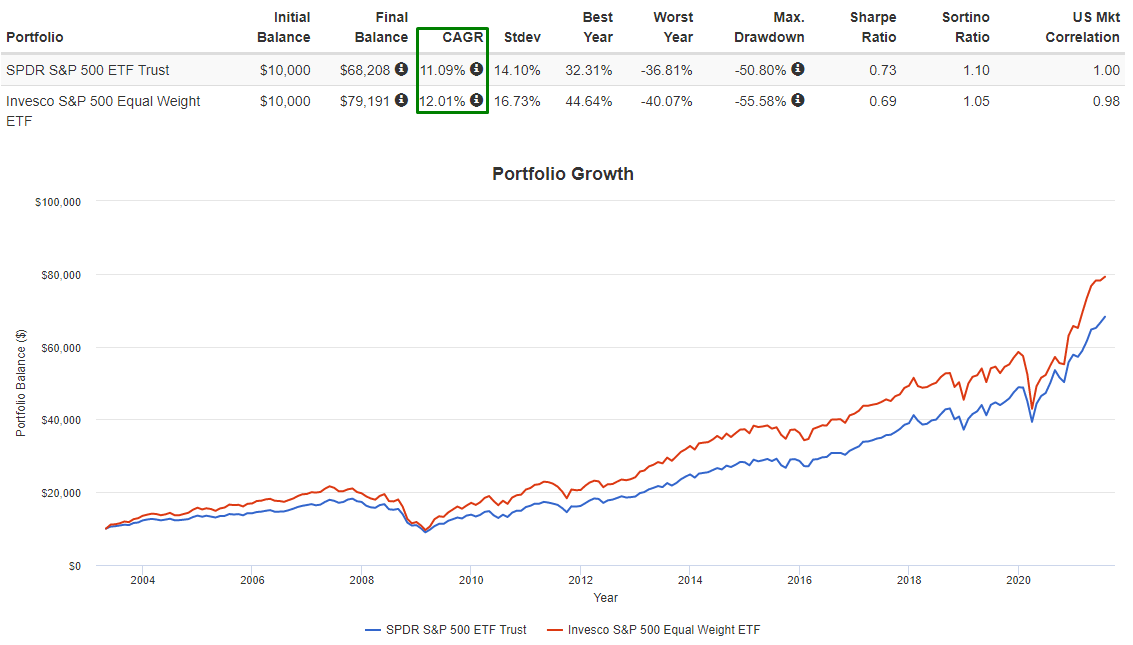 We can see a small outperformance of ~1% over the last 18 years. But I wouldn’t call 18 years a sufficient data sample to confirm the existence of a performance effect from smaller capitalizations.

Ycharts has data for a 30-year period: 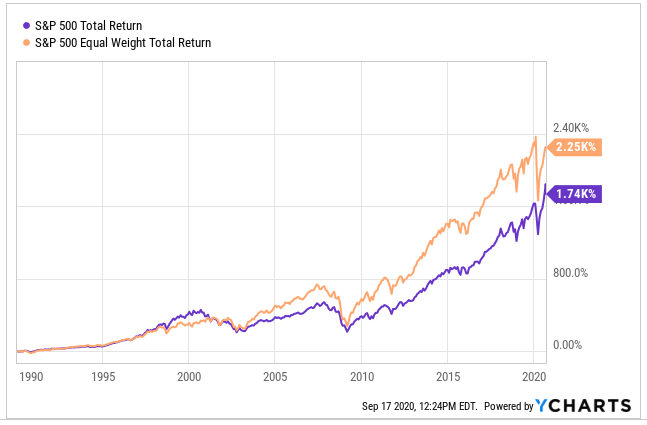 As you can see, the performance of ~1% remains over a longer period of time.

I have come across studies of synthetic equally weighted indexes since 1926, where performance has remained for a 90-year period.

But let’s tweak our idea a bit.

What if we abandoned the S&P500 index altogether because each company that is included in the index is inherently very large? S&P have already thought about this and created an index for good companies with capitalizations insufficient to get into the S&P500 and called it the S&P MidCap 400 Index.

This idea is very easy to backtest in Portfoliovisualizer, as we have a wonderful IJH ETF that replicates the composition of this index: 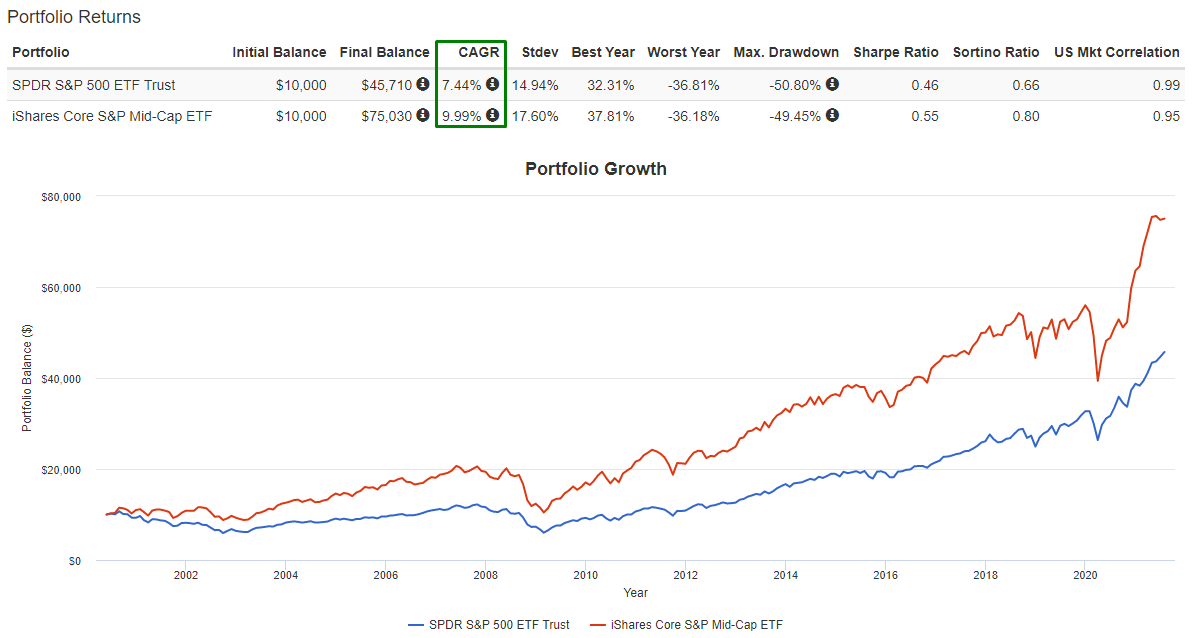 We can see the preservation and strengthening of performance over the S&P500 already at + 2.5% for 20 years.

Let’s see if the performance continues over a longer period of 50 years: 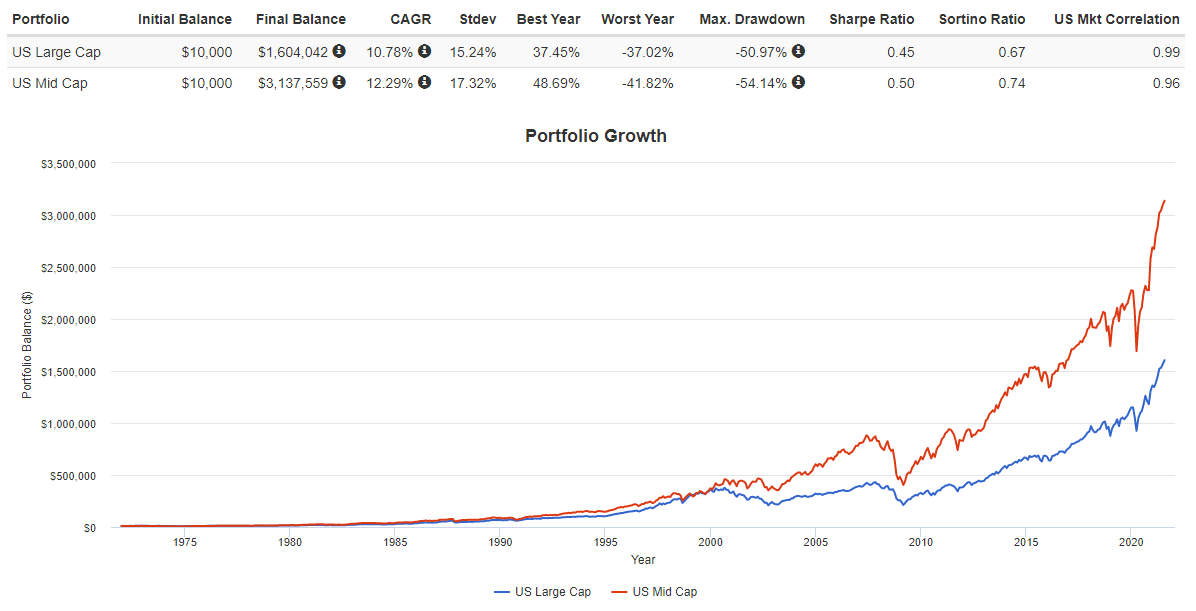 We can see that the outperformance remains at the level of +1.5%, which is more than for the S&P500 Equally Weighted.

Let’s look at the reports on China and Japan by MSCI, which deals with index investing in markets around the world.

Important: pay attention to the “since” column, because for some reason the graphs are not displayed in pfd for the entire time period.

This immediately raises a question: can we still improve our results by taking small-cap companies rather than mid-cap ones? It’s possible, but not quite directly because of one feature: 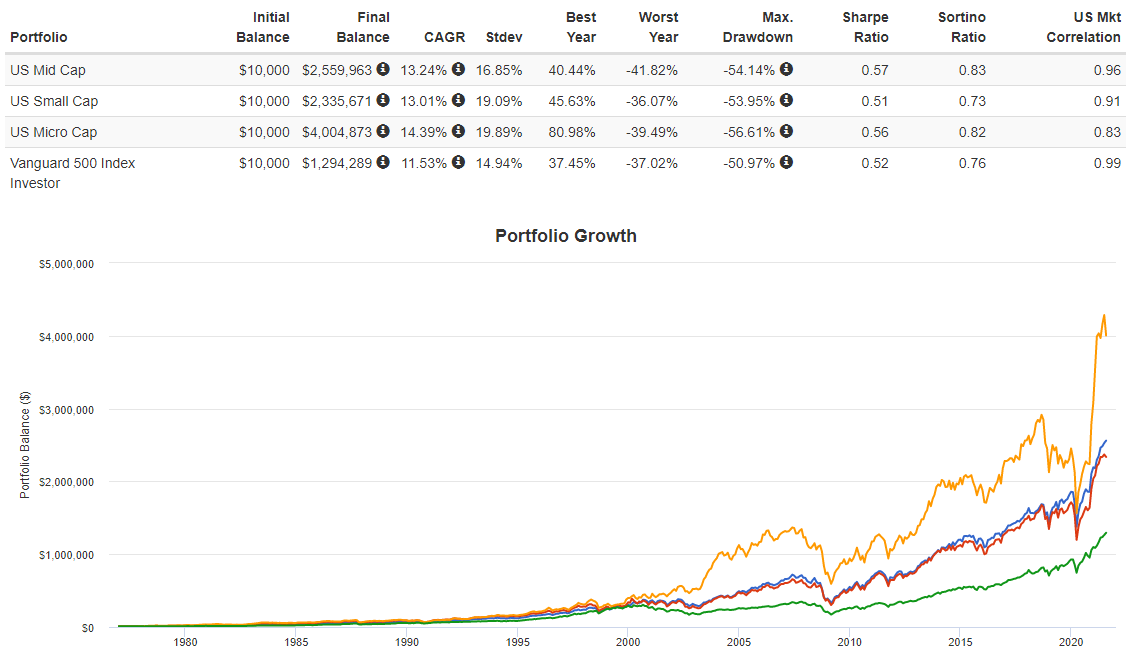 In the MSCI indexes, there’s no separation between micro and small. A company of any size can be included in the small index.

Links to the MSCI report on Europe. Indexes between capitalizations are not synchronized in time from the beginning and do not lend themselves well to comparative testing.
Large. Medium. Small.

Nonetheless, premium differences of several % by capitalization can be observed here as well.

Is it still possible to improve profitability results? It’s possible, but this is already beyond the limits of passive index investing. To do that, you need to create your own security indexes that further exploit the small capital advantage that index funds do not have because of their large positions. But that’s a topic for another conversation.

To summarize: if you are a private investor with a small amount of money, I strongly believe that you should only consider small companies because the only advantage large companies have is their capital capacity and liquidity. Leave this game to the big guys who are forced to play it because they feel very cramped in the more profitable minor league and all of their profitability will be eaten up by slippage when entering and exiting positions with very large volumes. Let’s maximize our advantage of small capital.

It would be great if you could share your remarks or questions regarding this article. Please leave a comment below this article or contact me here. I always answer all questions.

Good trading to everyone and see you in the following articles!