I’d like to give you a more detailed history of my trading over the last 3 years with illustrations. Detailed profitability statistics can be found here.

There have been 3 major mistakes in a total of several dozen trades. They are all quite simple and very easy to avoid with enough experience. But I didn’t have that experience at the time : ) 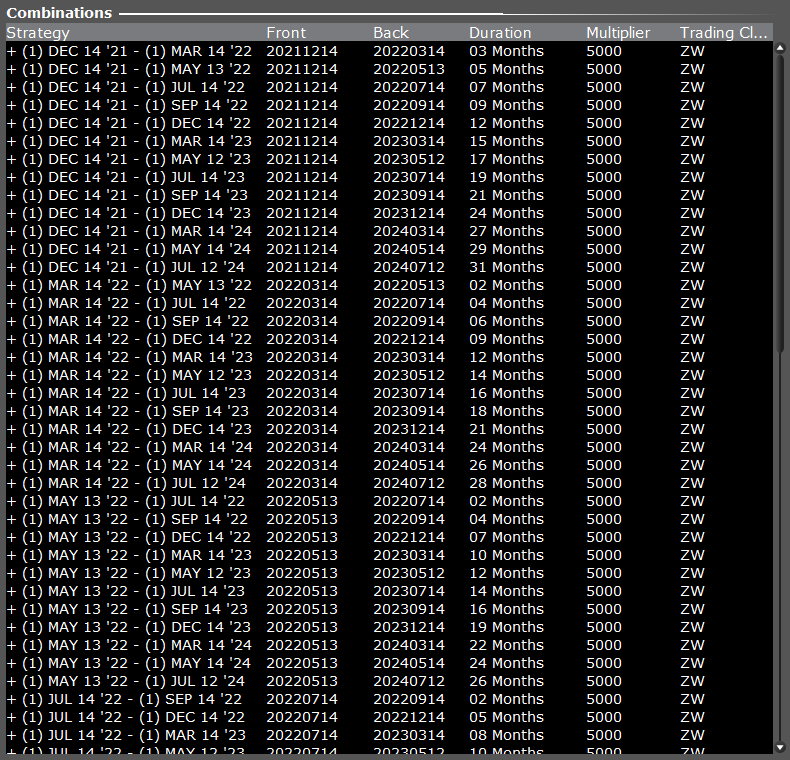 This error only affects the volatility of the spread, not its profitability. Some combinations are more volatile, others less so. If you have a small account size, you should choose less volatile combinations. I traded a calendar spread for several months and after a few weeks the drawdown became suspiciously large. According to my calculations, such a drawdown with only one spread can occur only in exceptional cases. After rechecking the positions, I saw what I was afraid of – an error in the letter of the month of one of the tickers. The only right decision was to close the current position and open the correct low-volatility spread. After a few days, the spread started to move in the right direction and closed in the targeted profit)) It turned out that I was taking a risk on high volatility and making a profit on lower volatility, which greatly affected the final Sharpe of the trade. Had I not closed the wrong ticker, the profitability would have been 2 times higher, but there was no way I was going to violate the risk management rules. More on that later.

Conclusion: always double-check the ticker symbols immediately and the next day after the position has been taken.

I deviated from a market neutral profile to get more profitability at that moment. As you can see, the idea worked quite well just before the drawdown. However, the problem with shifting the balance of market neutrality is that by generating excess returns on one side, you expose yourself to market risk on the other. Now I don’t do that and try to achieve almost complete market neutrality. Deviations from the optimum of market neutrality only deceptively increase trading results. It’s much better not to shift towards correlation with the market, but simply to take more risk at a neutral profile. A very childish mistake. That was enough for me once to stop playing the market forecaster : ) Trading paradox: results are much better when we don’t try to predict a specific realization of the future.

Conclusion: it’s not worth making predictions. It’s necessary to make the portfolio as balanced as possible so that it automatically covers various future scenarios.

The period of the first two years of trading is characterized by the fact that there were fewer trades and they were of much lower quality than the ones I make now. If you add up the premiums that are being traded now, you can see that I’ve lost at least a third of the final annual return : (

Things were going pretty well and a very cool trade with excellent stats was on the horizon. At the time I didn’t have a very large account, about $17k. The problem was that the minimum balance in the account for a position on this spread was $25k. Well, I decided that I would do it with $17k. That is, I decided to take a position that was 1.5 times more aggressive than previous trades. I can’t say it was a very bad decision, because even with that kind of risk, there could be no fatal disasters. Still, the overshoot was only 1.5 times, not 2 or 3 times. But this time they were realized and brought a risk/reward ratio that was much higher than for other trades in the past. I was able to make 1.5 times the norm, but ended up losing 1.5 times the norm. That’s fine, but the smoothness of the picture has deteriorated.

Conclusion: always use about the same risk management for all trades. If a trade does not fit the risks of the portfolio, just give it up. But if you really want to, you can sometimes take on increased risk by accepting the uneven volatility of your yield curve.

Over this period, I have not made any serious mistakes like those described above. I’ve always had about the right risk management. I never deviated from the concept of market neutrality. After becoming fully convinced of the efficiency of my trading method, I also decided to increase the size of the account. This allowed me to make a larger number of previously unavailable trades at acceptable risks. Yes, rare drawdowns of more than 15% on the account are still possible according to backtests. But they will occur much less frequently, and the account will recover from them much faster.

Reviews of the cooperation are here.

It would be great if you could share your remarks or questions regarding this article. Please leave a comment below this article or contact me here. I always answer all questions.

I wish everyone good trading and see you in the following articles : )

The easiest way to beat the S&P500